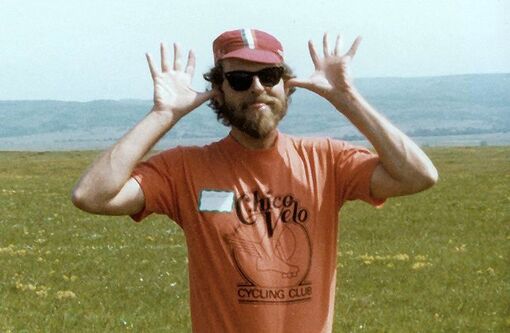 Ed McLaughlin was born in East Orange, New Jersey and was raised in Bloomfield, NJ. He had a lifelong affection for his home state, even forming The New Jersey Club here in Chico. Before coming out west, Ed was in the US Army during the Vietnam era. In 1966, he came to California to take advantage of the GI Bill to go to school and experience the west coast. He lived and went to school in Santa Barbara and Arcata, CA. Suffice to say he participated fully in his generation. He maintains friendships with many of the folks he met during those years. He studied Art at CSU, Humboldt, and then worked for a while at the Welfare office in Eureka.
In 1976, Ed moved to take a job with the Social Security office. It was soon after this and with the advice of a doctor, Ed quit smoking, started running and, of course, cycling. After leaving Social Security (it was cutting into his riding time too much), he worked for Sierra Nevada in its formative years and then started a bicycle messenger service: Edscargo (escargot. . . get it?). At that time there was a cycling group in Chico called Mellow Velo. He started riding with this group, making life-long friends and becoming addicted to the bike. Through his enthusiasm for cycling, his goal was to get folks out of their cars to walk or bike and to facilitate changes throughout Chico to make alternative transportation easier. In 1982, he retired from car ownership. In 1985, Ed became the Director of Chico Velo Cycling Club, formerly Mellow Velo. Ed was instrumental in growing the Wildflower Century into the 3000+ rider event it is today. Through his efforts, he gained national notoriety for Chico from the League of American Cyclists and Bicycle Magazine. His work for Chico Velo and his advocacy efforts dropped off after a cycling accident in 2007 left him a quadriplegic. But as he regained his strength, he regained his engagement in city matters, sending emails and cruising around town in his wheelchair.
Probably the biggest influence Ed had on our town was to encourage advocacy, through civic participation, to achieve change in the city. Any number of past and present city council members and members of city boards and commissions ran for office or appointment at Ed's urging. That is why we have so many bike/pedestrian friendly facilities throughout town. Ed personally ran twice for city council on the platform of "common sense in growth".  Sadly, or not, depending on who you talk to, his election efforts were not successful. Ed of course had many other passions; art, music, travel (he could talk endlessly about his multiple bike tours to Europe and France especially) and gabbing with friends over coffee or a drink. Many of Ed's friends are repeatedly amazed by how well he kept in touch with longtime friends and could remember names and faces like nobody's business. He cherished his friends, loved re-connecting with past friends and watching his friends children grow up. He was "Uncle Ed" to a number of the town's children and young adults.
Early Thursday morning, May 24, 2012, Ed "The Bike Guy" McLaughlin finished his Grand Tour of Life. He passed away peacefully at home following a brief illness. The loss of Ed will be felt deeply, not just by his family and friends, but by our whole community and beyond.
Ed is survived by two brothers, George and Greg McLaughlin, both from New Jersey; nieces and nephews, Christopher, Peter, Trevor, Eric and Kaitlen; multiple cousins; and his partner of 8 years, Suzanne Hanson of Chico.*

Chico Velo celebrates the life of Ed McLaughlin annually in March during the Tour de Ed by raising funds for bicycle safety and outreach. His legacy will live on forever in Chico through the projects he fought for and won, including: ​
Ed's contribution to cycling and community in Chico and Northern California can't be overstated; so much of the bicycling infrastructure that we take for granted in Chico bears his "stamp". His passing marks the end of an era and we will miss him.

​*Published in Chico Enterprise-Record on May 30, 2012
Read "One Chico Christmas Eve" by Tim Snapp, remembering Ed's accident on Dec 21, 2007 and the Christmas Eve vigil for Ed that year.
Below are photos gathered over the years by those who knew and bicycled with Ed.
News  |  Calendar  |  Local Weather  |  Volunteer  |  Donate |  Contact Us